Voter turnout above 30% in the Central province; Vavuniya at 20% 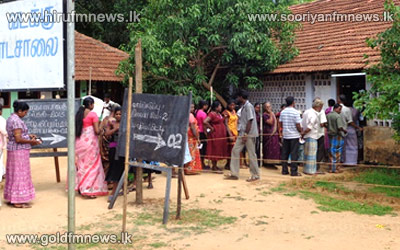 The polls began at 7 in the morning today at 3 thousand 712 polling stations and will close at 4 in the evening.

The Returning Officer in charge of the Central Province D. P. G. Kumarasiri stated that currently the voter turnout in the Central province has been approximately 30 percent.

Our regional correspondents stated that the election in the Northern Province which is being held after 25 years has been peaceful thus far.

The Returning Officer in charge of the Vavuniya district Bandula Harischandra stated that the election process has been peaceful thus far with no major incidents being reported.

The Returning Officer in charge of the Kurunegala District H. M. A. Hitisekara stated that more than 30% of voters have cast their ballots and that the overall situation has been peaceful.