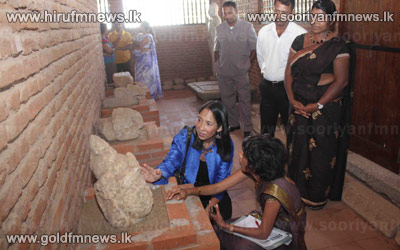 U.S. Ambassador Michele Sison visited the Yatala Museum yesterday to view rare antiquities found during the excavations of Yatala Dagaba, which were preserved with a 4 million rupee grant from the Ambassador’s Fund for Cultural Preservation.

During her visit, the Ambassador met with Department of Archeology Acting Assistant Director of Museums.

Grants such as this from the Ambassador’s Fund for Cultural Preservation allows for the restoration and preservation of timeless treasures.