Video : International interventions on the pretext of security and human rights regrettable - President 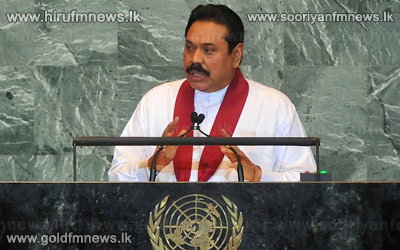 President Mahinda Rajapaksa said that it was regrettable that some countries were interfering in the internal affairs of developing countries posing off as trustees of human rights protectors of security.

The President said that as a result of this, disturbances that contribute to forced political changes were seen world-wide.

The President expressed this view while addressing the 68th session of the UN General Assembly yesterday.

On this occasion President Mahinda Rajapaksa also emphasized that it was regrettable that unilateral actions like imposing of embargos and economic sanctions on countries were taking place.

President concluded his speech at the UN General assembly with a quotation from the Dhamma Pada.