Navy Pillay gives a deadline to the government 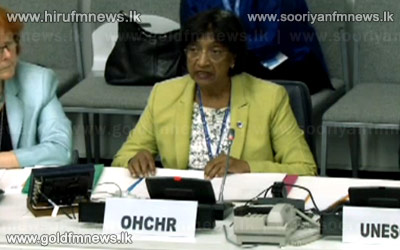 UN High Commissioner for Human Rights Navi Pillay has stated that the government of Sri Lanka should use the time from now until March 2014 to address its human rights concerns.

In a statement by the High Commissioner to the UNHRC on Sri Lanka, she stated that Sri Lanka should engage in a credible national process with tangible results including the successful prosecution of individual perpetrators.

Pillay in her statement to the 24th session of the Human Rights Council in Geneva on Wednesday, which was read out by her deputy Flavia Pansieri, stated that in the absence of a proper inquiry, the international community will have a duty to establish its own inquiry.

She commended the government on its achievements with relation to reconstruction, resettlement and rehabilitation and thanked the government for inviting her and facilitating her visit to the Country.

Pillay also welcomed the Northern Provincial Council polls and expressed her hope that this would usher in a new stage of power devolution.