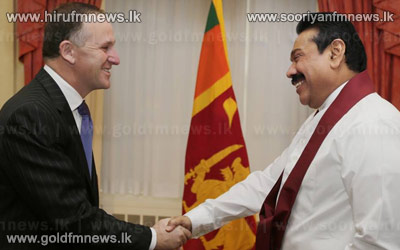 In a cordial conversation, the two leaders talked about a number of topics, including the Commonwealth Heads of Government Meeting 2013 that will take place in Colombo in a little more than a month.

Prime Minister Key told President Rajapaksa that they are looking forward to participate at the CHOGM.

Pointing out that Sri Lanka is a very important market for New Zealand’s dairy sector, Prime Minister Key said that his country has a great deal of technological expertise that it is willing to share to further develop Sri Lanka’s dairy sector.

Prime Minister Key also requested President Rajapaksa to consider supporting New Zealand in its bid for a seat at the United National Security Council for the period 2015-2016.