Video : Govt calls for a report from contractors with regard to the Mutwal incident that killed 2 persons. 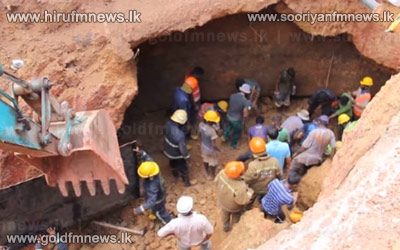 A report has been called from relevant contractors with regard to the accident that took place as a result of an earth slip that occurred when an excavation was carried out as part of the Greater Colombo Water Supply Re-structuring project.

Director of this project of the Water Supply and Drainage Board Sunil Wijemaanna told our news team that the relevant letter had been sent to the contractor yesterday.

Due to an earth slip that took place when an excavation pertinent to a water pipe in Mutwal was in progress, four persons were trapped under the earth slip last afternoon.

While, as a result of it, two persons were killed, two others are currently receiving treatment at the Colombo National Hospital.

Hospital sources said that the condition of one of them was serious.

27-year old resident of DhehiAtta-Kandiya Janaka Gaamini Bandaara is currently receiving treatment at the National Hospital as a result of a serious wound  on one his feet.