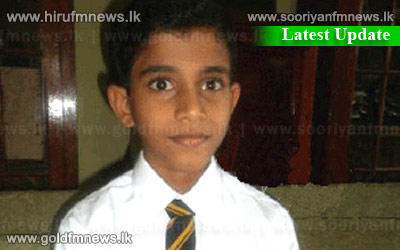 Sandaru Tathsara Balahewa of the Mahinda College Galle has scored 198 marks and became the first in the year-5 scholarship examination held this year.

The Examination Department stated that there are 3 second places and 5 third places as well.

Sandaru Tathsara Balahewa speaking to our news team said that his ambition is to become a surgeon in the future.

Meanwhile Tamidu Swarna de Silva of the Dharmasoka Vidyalaya in Ambalangoda, Shenuka Dulanjana of the Teraputta Primary School in Ambalantota, and Nuransi Roneth of the Vidyakara Primary School in Opanayake have obtained 195 marks each and claimed 3rd place in the examination.

Meanwhile the Examination Department says that application for scrutinizing of the year-5 scholarship should be sent to the department before 15th of this month.