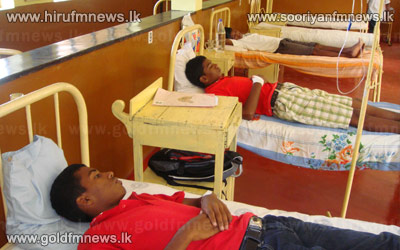 A private bus conductor has assaulted 4 school students with an iron club at the Baddegama Bus Stand yesterday afternoon.

The victims are students of the Baddegama Christ Church College and 3 of them were admitted to hospital after the assault.

Later, 2 of them were transferred to Karapitiya hospital in Galle.

The suspect is serving on the route between Baddegama and Galle via Wakwella.

Police said the suspect will be produced before the Baddegama Magistrate today.

4 students hospitalized after a bus conductor assaults them

4 year-11 students of Baddegama Christ Church College were admitted to hospital after they were assaulted by a bus conductor at the Baddegama Bus Stand yesterday afternoon.

Later, 2 of them were transferred to Karapitiya hospital in Galle.

Police said that they arrested the suspected bus conductor.