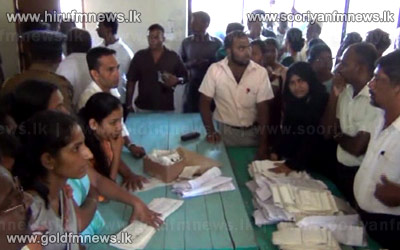 The ballot papers found in Puttalam’s St. Andrew’s College has been recounted.

The ballot papers were recounted in the presence of Puttalam Magistrate Ranga Dissanayaka based on a court order.

The recounting which began at 2pm this afternoon concluded at approximately 5.30pm and subsequently 6464 ballot papers were discovered to be in the lot.

These bags recovered on 24th September will thus be opened for computing the number of polling cards contained in these bags.

Puttalam Magistrate Ranga Dissanayake issuing an order yesterday said that the 12 candidates, who had signed at the time of sealing of the bags, should participate in the occasion without fail.

Similarly the Magistrate has said in his order that Puttalam Police Investigation Officers and officials who had been engaged in election duties should also participate in the occasion.