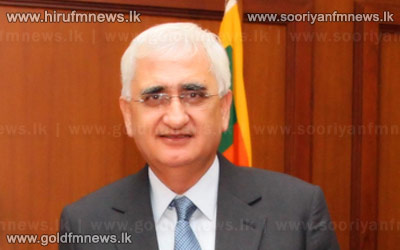 The Indian Foreign Minister currently on a on a two-day official visit to the island said so when he met people of Mannar in Jaffna yesterday.

After the pow-wow Northern Province Chief Minister C. V. Vigneshvaran said that at that occasion the Indian Foreign Minister had requested the CM to work cooperatively with the Government.

India applauds the valour of the President.

India has applauded President Mahinda Rajapaksa’s valiant decision to hold an election in the North and his leadership given towards the process.

Visiting Indian External Affairs Minister Salman Khurshid expressed these views during his meeting with President Mahinda Rajapaksa at the President’s House this afternoon.

Minister Khurshid has stated that the Northern Provincial Council election was an important step in the forward march.

It was also stressed that the decision to hold discussions among the fishing community was a practical step to settle the dispute between Indian and Sri Lankan fishermen.

President Mahinda Rajapaksa said that the Parliament Select Committee would be the best platform to settle issues that erupted regarding the 13th Amendment.

The President said that he would trust more on a home-grown mechanism to be worked out by the Parliament Select Committee.

President Mahinda Rajapaksa said that the Parliament Select Committee would be the best platform to settle the issues that have erupted with regard to the 13th Amendment.

When the President met Indian External Affairs Minister Salman Khurshid at the President’s House this morning, the President has told the latter that he would trust more on a home-grown mechanism to be worked out by the Parliament Select Committee.

President’s Media Spokesman Mohan Samaranayake said that the meeting between the President and Indian External Affairs Minister was one step of the Indian Minister’s tour in Sri Lanka.

The President and the visiting Indian Minister have had lengthy discussions on economic and bilateral ties between the two countries during this meeting.

It was also decided to organize meetings between the officials of the respective fields of both countries in order to reduce trade imbalances.

Indian Minister Khurshid has told the President that India would always appreciate the democratic steps taken by the Sri Lankan government.

The President and the Indian Minister have exchanged views on the regional issues with regard to the two countries during the meeting held this morning.

Later Minister Khurshid was to begin a tour in Jaffna, and he is scheduled to meet Governor G.A. Chandrasiri and Chief Minister C.V. Wigneswaran of the Northern Provincial Council.

Professor Peiris stated that In this regard, the 2 parties agreed to encourage fishermen’s associations on both sides, which had met in the past and reached certain understandings, to meet again to work on developing on this trend further.

Devolution should be on constitutional limits and people s aspirations.

Speaking to journalists, Indian Minister Khurshid stressed that power should be devolved on the constitutional limits and the people’s aspirations.

Meanwhile the agreement for the Sampur Coal Power plant was signed between Ceylon Electricity Board and Indian National Thermal Power Corporation this afternoon.