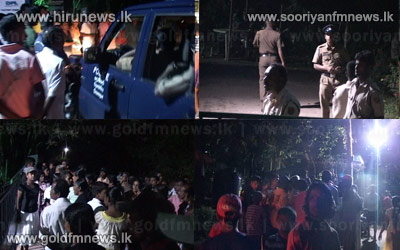 A tense situation cropped up last night before the factory which had become the subject of controversy in Rathupaswala in Waeliweriya.

This occurred in coincidence with factory authorities and Venerable Theripaehae Siridhamma Thero and resident representative signing an agreement yesterday for continuing the operation of the  factory for another six months.

While this discussion was held at the Gampaha police station with SP in charge of Gampaha Division Vijitha D. Komasaaru at the chair, they reached this agreement subsequently.

It was said in the agreement that consensus had been reached for stopping the factory’s production activities by 30th April 2014.

In this agreement the factory authorities had also expressed their consent for making necessary initial payment for obtaining pipe line water connection for 3000 families including Samurdhi beneficiaries.

However Rathupaswala residents who came to know about this agreement assembled in front of the relevant factory last afternoon.

They had staged a protest saying that they could not accept the said agreement.

It is said that while these people stayed at the said place till mid night yesterday, they had dispersed after Venerable Theripaehae SiriDhamma Thero who came to the spot stated that the said agreement would be nullified