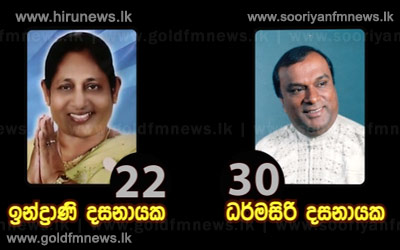 In a secret vote taking held at the inaugural meeting of the Council today, government proposed member Indrani Dasanayake was defeated by another UPFA member Dharmasiri Dasanayake who obtained 8 majority votes against Indrani.

The Council had to hold secret votes to elect the Chairman and the Deputy Chairman after the UNP proposed names of UPFA members for both positions.

UPFA General Secretary Minister Susil Premajayantha announced the names of those who be appointed to the other positions of the Central and North Western PCs after the members’ sworn-in ceremony held recently at the Presidential Secretariat.

Accordingly, Indrani Dasanayake had been picked up to be appointed as the Chairman of the North Western PC.

However, after the inauguration of the Council today, Chief Minister Dayasiri Jayasekera proposed Indrani Dasanayake’s name to the Chairman post.