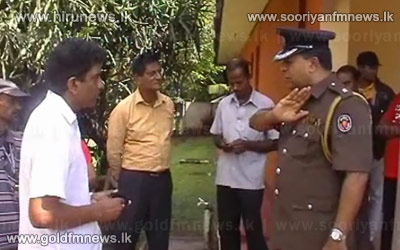 Gampaha ASP Chandana Kodithuwakku has allegedly forced a group of activists to abandon a vehicle parade to spread awareness regarding the drinking water issue in Rathupawala.

An organization for the protection of water had organized a vehicle parade today to educate the public regarding the Rathupaswala water crisis.

A heated debate occurred between between the ASP and the protesters who had gathered at the Gampaha – Mirissa-waththa junction.

The convenor of the organization Pramitha Hetiarachchi stated that they had already informed the DIG in charge of the West North region.

When inquired from Police media spokesperson SSP Ajith Rohana stated that the protest was halted according to a court order.

According to the Gampaha Magistrate court verdict protests or parades cannot be held in Rathupaswela and Malwathu- hiripituii police regions until the 20th of this month.