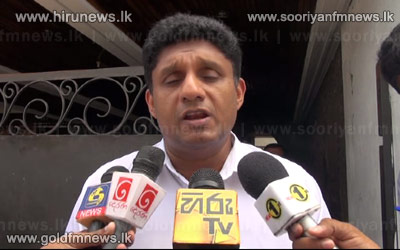 A special powwow between Opposition Leader Ranil Wickremasinghe and MPs Sajith Premadasa and Karu Jayasuriya was held at the Opposition Leader’s office last afternoon with regard to the Supreme Council proposed to be appointed by the UNP.

In a special release issued the UNP said that at the powwow lengthy discussion was held with regard to the proposed new machinery for putting the party on a victorious path.

It was decided at the powwow that further discussion should be held on the subject.

Speaking to media after the powwow MP Karu Jayasuriya said that the discussion had been held in a positive manner with regard to the party’s future.

In addition MP Sajith Premadasa who participated in the powwow said that several proposals were presented to Party leader Ranil Wickramasinghe.

Speaking to our news team UNP General Secretary Tissa Attanayake said that however the party would hold several rounds of discussion during the next few days and speedily begin the party’s victorious journey.

The special discussion between parliamentarians Ranil Wickramasinghe, Sajith Premadasa and Karu Jayasuriya regarding the proposed supreme council has begun at the UNP headquarters.

A senior spokesperson of the UNP stated that the discussion will focus on the number of representatives that will be appointed for the council and its duties.

In addition the discussion will also focus on the actions the UNP will take during upcoming elections.

The UNP’s working committee which convened on the 5th of this month gave parliamentarians Ranil Wickramasinghe, Sajith Premadasa and Karu Jayasuriya the authority to engage in discussions regarding the proposed supreme council.

Although the discussion was scheduled to be held last Thursday it was postponed till today following a request by MP Sajith Premadasa.

A discussion is scheduled to be held between Opposition Leader Ranil Wickremasinghe, and MPs Sajith Premadasa and Karu Jayasuriya today about the proposed Supreme Council.

A senior UNP spokesman said that discussion was due to be held at this meeting with regard to the number of members to be appointed to the council as well as the role of the council.

In addition to this, attention would be drawn at this discussion on party operations at future elections.

At the Working Committee meeting held on 5th this month authority was vested with the Opposition Leader and MPs Sajith Premadasa and Karu Jayasuriya for discussing about this Supreme Council.

Although that discussion had been scheduled to be held last Thursday it was decided to be held today on the request of MP Sajith Premadasa.