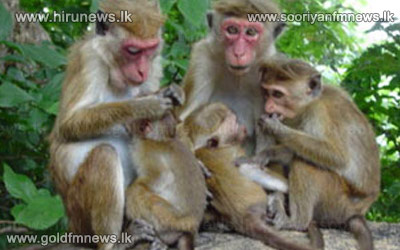 The department of wildlife has initiated an investigation into the sudden death of a large number of macaques in the Balangoda – Kongahamankada region bordering the Udawalawa national reserve.

Speaking to our news team the residents of the region stated that approximately 40 macaques have perished thus far.

Our news team inquired from the assistant ranger in charge of the Kapugala region of the Udawalawa national reserve M. P. Gunawardena regarding this.

In response he stated that initial investigations have revealed that the reason for the death of the macaques is consumption of rice mixed with the pesticide Curator which was given to the macaques by an individual.

He also stated that the macaque is not a protected species under the Flora and Fauna act.

However, the Walawe River is in close proximity to the region where the macaques died.

M. P. Gunawardena stated that due to this reason steps were taken to remove the dead bodies of the macaques immediately.

Our news team inquired from environmentalist Jagath Gunawardena regarding the macaque not being named a protected species under the Flora and Fauna act.

In response he stated that although the macaque has not been named a protected species, no individual has the ability to kill wildlife utilizing any form of poison.