Today is the Wap Full-moon Poya. 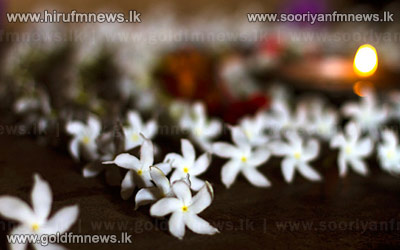 Today is the Wap Full-moon Poya.

While Lord Buddha was living in the Veluwanaramaya Viharaya which was built and donated by King Bimbisara in the Rajagaha Nuwara called upon all the Bhikkus to be within their temples during the Vas period.

Lord Buddha was living in the Madya Predesh, India and during Lord Buddha’s time this area experienced heavy rain during this four month period.

Despite, the inclement weather, Bhikkus the followers of Lord Buddha continued their routine of walking from village to village to obtain their daily food and perform other rituals.

The devotees protested that Buddhist monks should not engage in such strenuous rituals during this heavy rainy season.

Lord Buddha called upon the Bhikkus, instead of walking from village to village, to be within one place and to indulge in preaching Dhamma and other rituals for the people, which would then renew and strengthen the ties between the Bhikkus and the laity.

Another significance of the day is that the future Buddha, Maitriya Bodhisatva, entered the order with a entourage of 500 followers on a Wap Poya day.