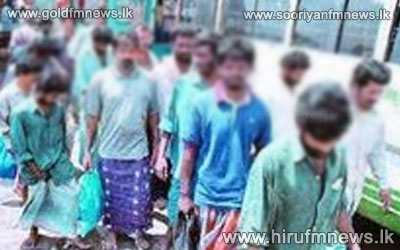 The arrested 32 Indian fishermen while fishing in Sri Lankan marine territories were remanded when they were produced before the Trincomalee Acting Magistrate today.

Along with the fishermen, navy also took into custody 5 fishing boats.

Meanwhile navy in collaboration with the Fisheries Department arrested 89 local fishermen who violated permit conditions and used purse seines in the sea off Trincomalee coastal area.

Later the fishermen were remanded till 21st of this month when they were produced before the Trincomalee Acting Magistrate today.

In addition, 13 fishing craft used by these fishermen to lay purse seines in the sea were also taken into navy custody.

Fisheries Department’s Trincomalee District Assistant Director Upali Samaratunga said that his department had received several complaints about the use of illegal fishing nets by certain fishermen in the area.

Later the Department sought the navy assistance to nab the culprits who used illegal fishing gear that contravene to the permit conditions.