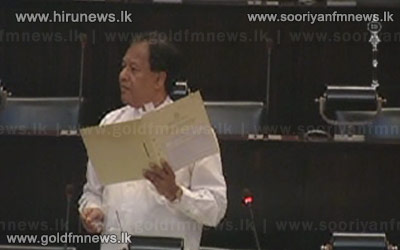 9 resolutions under the customs ordinance act and special trading goods act were passed in parliament yesterday.

Addressing parliament deputy finance minister Sarath Amunugama stated that the producer and the consumer must be equally protected.

Meanwhile, In reply to a question leader of the House Minister Nimal Siri Pala De silva stated that the government cannot reveal the amount spent for ammunition and weapons for years 2010, 2011 and 2012 since it is a threat to National security.

However, opposition leader said that since figures are sent to the accounts committee the details can be tabled at the chambers.