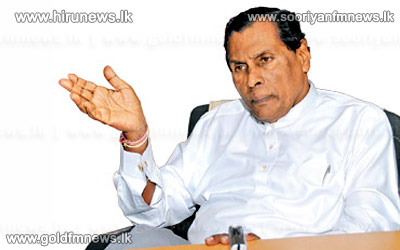 The government states that parties that are stating they will not take part in the Commonwealth Heads of Government Meeting are those who are trying to create obstacles to the forward journey of the country.

Minister of Public Administration and Home Affairs W. D. J. Seneviratne made this statement in response to an inquiry by our news team with regard to the statement made by the Tamil National Alliance stating that it will not take part in CHOGM.

TNA parliamentarian Mawei Senadhiraja stated that the TNA has decided not to take part in CHOGM.

Meanwhile, upon an inquiry by our news team, general secretary of the JVP Tilvin Silva stated that the JVP will not take part in the summit even if it receives an invitation.

Media spokesperson of the United National Party, parliamentarian Gayantha Karunathilaka stated that the UNP has not taken a decision on participating in the summit.

He stated that this will be discussed at the next meeting of the party central working committee.

However, speaking at a press conference held in Colombo today, UNP General Secretary MP Thissa Attanayaka questioned whether the government can face the expenditure.

However, the Minister of Public Administration and Home Affairs W. D. J. Seneviratne stated that the having the chance to hold the CHOGM summit in Sri Lanka is a great opportunity.

He also elaborated that regardless of the statements made by the opposition, the government will work towards holding a successful summit.