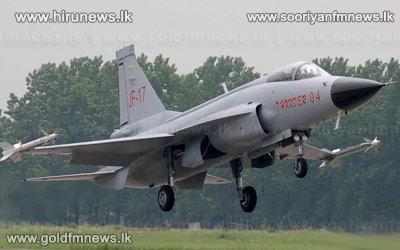 Pakistan has decided to start sale of state of the art JF-17, Thunder combat planes developed by the collaboration of China to several other countries including to Sri Lanka from next year.

Pakistan Defence ministry Production sources said as many as 42 JF-17 Thunder planes have been developed so far under joint venture with China.

Pakistan Air Force  has been assigned a target of exporting 5 to 7 JF-17 Thunder planes next year, and the discussions in this regard are under the way to Sri Lanka, Kuwait, Qatar and other friendly countries.

Pakistan Ministry of defence Production officials have expressed optimism that Pakistan would succeed in exporting these modern planes in the next year.