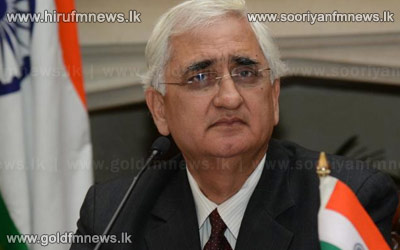 Before committing suicide he had stated that no Indian should participate in CHOGM held in Sri Lanka.

Indian Media reported that although the police took steps to take the person concerned who had committed suicide by setting fire to his body to the hospital, he died before he could be hospitalized.

Political parties in Tamil Nadu expressed their anguish and disappointment over external affairs minister Salman Khurshid s reported remarks assuring his participation in the Commonwealth Heads of Government Meeting in Colombo next month.

Political parties in Tamil Nadu expressed their anguish and disappointment over external affairs minister Salman Khurshid s reported remarks assuring his participation in the Commonwealth Heads of Government Meeting in Colombo next month.

In a statement, PMK leader S Ramadoss also condemned Khurshid s remarks and requested the Prime Minister to remove him from the cabinet.

Karunanidhi also recalled that the PM had recently written to him, saying that a decision on the issue of his participation in the CHOGM conference would be taken only after considering all relevant factors, including the sentiments of the DMK and the Tamil people.

The DMK chief took exception to Sri Lankan envoy to India Prasad Kariawasam s statement that New Delhi would get isolated if it did not participate in the CHOGM meet.

At a meeting in Delhi, DMDK leader Vijayakanth reiterated his party s stand that India should not participate in the meet.

Indias External Affairs Minister Salman Khurshid will represent India at the Commonwealth Heads of Government summit, though the Tamil Nadu Assembly passed a resolution urging boycott of the meeting.

However, there is still a question mark over who among the three VVIPs will attend the summit - President Pranab Mukherjee - Prime Minister Manmohan Singh or Vice-President Hamid Ansari.

However, government sources said India was unlikely to follow Canada, which has decided to go unrepresented at the meeting on the grounds that Sri Lanka has not done enough to address allegations of human rights abuses.

He also stated that by not engaging with Sri Lanka, India will be losing out.

Sri Lankan Foreign Minister G.L. Peiris expressed his country’s preference for India to be represented by Dr. Singh when he visited New Delhi in August to hand over the invitation.