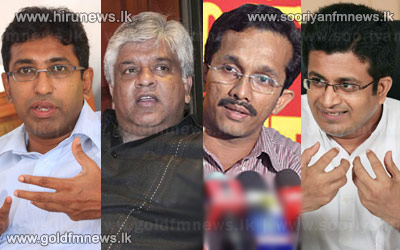 Heavy protest is leveled by the people against the Casino gambling as well as ‘race by race’ taking place in the country.

By now opposition is continuing to come up from people’s representatives as well against the ‘race by race’ gambling.

UNP MP Harsha De Silva stated that Casino and Race by race dealers are carrying it out the business with arrack businessmen and the public must realize it.

JVP MP Sunil Handunetti expressed his protest against the ‘race by race’ gambling and said that gambling destroys the culture.

JHU deputy general secretary Udaya Gammanpila said that if any MP or Minister is trying to promote gambling by introducing new laws to parliament they are ready to defeat it.

NFF Media spokesman Mohammad Musammil says that all possible impediments should be deployed for ‘race by race’.

DNA MP Arjuna Ranatunga said that all MPs should oppose ‘race by race’ and that all parliamentarians are ready to support that cause but they are scared to voice their true opinion.

He said that race by race must be eradicated from villagers first.

Race by race must be stopped; a massive protest from the public

The Casino gamble is a much-talked of topic in the political arena these days.

However similar to casino another socio-economic problem has affected the country.

That is the betting in horse racing or race by race gambling.

The long-standing horse races had been restricted to only to a sport in the past.

It had spread to the US, UK, Canada, Australia and Middle East giving priority to sport.

While subsequently the rich spectators started betting for horses, this betting meant for the entertainment of the rich spread to Sri Lanka in the fifties.

Persons of all strata got habituated to it turning it into a gamble more than as an entertainment.

Businessmen who operated these bets seeing the income coming  from this introduced technology making live watching of races possible.

Accordingly these centers known as “race by race” which were set up in every town overflowed with people.

While the sport “race by race” which destroys the human race has become a   curse in society, addicts to this gambling thronged these centres neglecting their wives and the hunger of their children.

People point out that the increase in the number of “race by race” addicts has become an impediment to the country’s development and make the poor more poorer.

However people say that new regulations should be formulated for eradicating ‘race by race’ from the country.