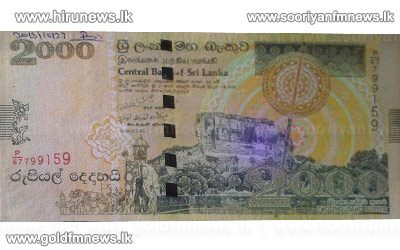 A cashier attached to a State Bank branch in Beruwala has spotted yesterday a 2000 rupees counterfeit note similar to that of the 2000 rupees fake notes seized in Pothu Aarawa in Malabe.

This fake note has been found amid a pile of currency notes brought to be deposited in the bank.

The businessman of Polkotuwa in Beruwala who offered the fake note to the bank has been taken to the CID for questioning.

The CID raided a home in Malabe and arrested 3 suspects in connection with a counterfeit currency racket on Monday.

1st suspect Dimuthu Ruwan Kumara, second suspect Allan Prem Pradeep Paligamuni and 3rd suspect Anura Senarathna were remanded till 11th of November when they were produced before the Kaduwela Magistrate.

Police media Spokesperson SSP Ajith Rohana request the public to be vigilant since counterfeit notes are still in circulation.

The 1st and the 2nd suspects arrested in connection with the 2000 rupees counterfeit note racket at Pothu Aarawa in Malabe were remanded till the 7th of next month when they were produced before the Kaduwela Magistrate yesterday.

Police investigation revealed that the 3rd suspect had received the counterfeit notes from the 1st suspect Dimuthu Ruwan Kumara.

The 3rd suspect will also be produced before the Court today.

CID raided a home in Malabe and arrested the 3 suspects yesterday.

Police said 1st suspect Dimuthu Ruwan Kumara was a Mathematics teacher and he was arrested on 3 previous occasions for the same offence.

The second suspect was identified as Allan Prem Pradeep Paligamuni, and investigations are on to arrest another 2 suspects in connection with the racket.

However keeping a counterfeit note in possession or tendering such a note for a transaction is an offence which would amount to 20 years imprisonment.

The mastermind of the 7 million rupee counterfeit racket arrested 4 times before.

Three suspects were arrested in connection with the 2000 rupee counterfeit note racket in the Potu Aarawa area in Malabe which amounted to 7 million rupees.

Police Media Spokesman SSP Ajith Rohana said that the mastermind of the racket was also among the arrested.

The racket was busted yesterday and police also took into custody several computers and printing machines believed to be used in the operation.

The 32-year-old mastermind is a Mathematics teacher, and has been arrested by the CID on 4 previous occasions for the same offence.

Police Media Spokesman SSP Ajith Rohana said that the suspect after obtaining bail has once again engaged in the same racket.

He requested the public to inform the nearest police station if they come across any counterfeit notes.