Video: An attempt to close down industries to cripple the country's economy 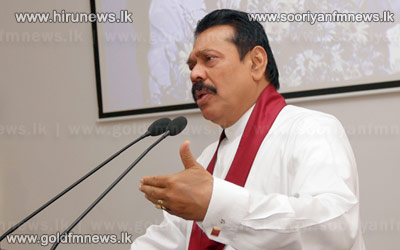 President Mahinda Rajapaksa said that people should be on alert as various elements are attempting to shut down industries and cripple the economy.

After declared open the auditorium of the Rubber Research Institute in Agalawatta, the President said such attempts are intended to buckle up the country’s development.

Meanwhile President Rajapaksa said that people of this country clearly know how to identify the sincere servants of the masses.

Addressing a ceremony to unveil a statue of former Education Minister late C.W.W. Kannangara at Iththepana in Matugama, the President said therefore the people are ever ready to stand by for such real public representatives.

Later the President participated in a ceremony to hand over 2 million rupees worth of medical equipment to the District hospital at Iththepana.

He also did not hesitate to visit the patients of the children’s ward of the hospital before he left for a similar visit to the Siri Revatha Pre-School.

From the Siri Revatha Pre-School, the President proceeded to the Colvin R de Silva Vidyalaya and engaged in a conversation with the students and teachers of the school.

President’s Media Unit stated that President Rajapaksa also engaged in conversations with the residents on several occasions during his tour in the area.