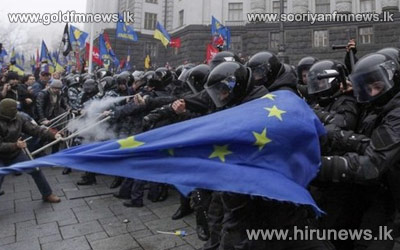 Ukraine's PM has expressed alarm at the country becoming a battlefield for the EU and Russia, as protests continue over a stalled EU trade deal.

Mykola Azarov also said an agreement with Russia had not been finalised on possible new financial support.

Kiev last week put on hold a historic trade agreement with the EU, prompting the EU to accuse Moscow of exerting heavy pressure on Ukraine.

The move triggered mass pro-EU protests in the capital and other cities.

Meanwhile, Azarov said President Viktor Yanukovych would attend a summit with the EU this week to discuss possible three-way talks with Russia on Ukraine's economy.