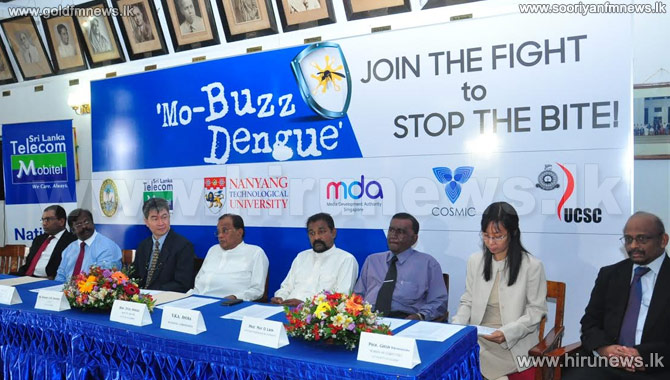 The Colombo Municipal Council’s Public Health Department, along with Sri Lanka Telecom Mobitel, the Nanyang Technological University, Singapore (NTU) and the University of Colombo School of Computing (UCSC) launched the ‘Mo-Buzz Dengue’ App recently to enable the general public to contribute towards the fight against dengue in Colombo.

Dengue has severely affected Sri Lanka in the past two decades. In 2014 the country reported nearly 40,000 dengue cases, a level of burden that has been consistent over the past few years. Developed by NTU’s researchers at the Centre of Social Media Innovations for Communities (COSMIC), Mo-Buzz Dengue will help to crowd-source dengue surveillance and provide education about dengue at the same time.

Effectively, the general public can now use the Android-based Mo-Buzz Dengue application to send a complaint about mosquito breeding sites with the click of a button. This can be done by taking and sending a picture of the breeding site using the application, which is automatically geo-tagged, thereby informing the CMC about the exact location of concern. Based on the geo-coordinates of the citizen inputs, the complaint will be routed to the public health inspector (PHI) responsible for the respective ward. The PHI will investigate the complaint and take necessary actions after which the citizen complainant’s record will be updated. Along with this function users can also learn more about dengue prevention through an educational module, learn about dengue danger zones within the CMC jurisdiction on a map, and directly call the nearest Medical Officer of Health (MOH) if needed.

“Our receptivity assessment with the general public in Colombo revealed an urgent demand for approaches where the general public can constantly engage with the public health authorities”, said NTU’s Associate Professor May O. Lwin, the Principal Investigator for the study. “Participatory approaches using social media are addressing public health problems around the world, and we are excited to be among the first to use it for the betterment of public health in Sri Lanka. We believe the nature of the dengue problem lends itself naturally to a social media solution,” she said.

The University of Colombo, School of Computing (UCSC) assisted with the development and maintenance of this system, and will contribute local technological intelligence to future versions of the system. “We all know that the field of computer science is getting increasingly inter-disciplinary and this project is a perfect exemplar for how computer science is being applied for a very real, and a very threatening health problem”, said Professor Gihan Wikramanayake, Director of the UCSC.

“Dengue is one of Colombo’s, and indeed, Sri Lanka’s gravest public health concerns. This technology creates a dynamic communication channel between the CMC and the general public and will bolster the effectiveness and efficiency of our surveillance efforts. If this system performs well, as we think it will, I am even supportive of expanding it to other public health problems such as food hygiene and safety,” said Dr. Ruwan Wijayamuni, Chief Medical Officer, CMC.

Meanwhile Mobitel’s Senior General Manager – Marketing, Mr. Nalin Perera commented, “Mobitel has always maintained its commitment to providing quick and efficient solutions to the people through its technologically superior expertise and resources. On this particular occasion we are indeed proud to be supporting this initiative by providing the necessary technology and connectivity to facilitate the Mo-Buzz system. We believe it will undoubtedly make a significant impact on the fight against dengue and would promote further awareness among people, which is an absolute necessity. As a responsible corporate citizen Mobitel has continuously been a staunch supporter of such initiatives as expressed in our motto, ‘We Care. Always.’ and we will continue to extend our hand for this initiative in future.”

Mo-Buzz Dengue is launched on the back of Mo-Buzz PHI, an earlier version that was created solely for use by PHIs for dengue surveillance efforts. The new system is geared towards the general public and is among one of the few pioneering efforts globally to integrate the power of crowdsourced health surveillance, dynamic disease mapping, and mobile-based health education on a single platform.

“Mo-Buzz represents among the finest inter-disciplinary efforts in the global health arena, in the way that it blends academic insights with rigorous research on the ground,” said Professor Schubert Foo, Director of COSMIC. “Our mandate is to create conceptually advanced, but easy-to-use social media solutions that can contribute to people’s well-being and we are pleased that our collaboration with CMC and Mobitel has made this happen.”

Earlier this year Mo-Buzz was nominated for the International Communication Association’s Applied Research Award. Dr. Lwin and her team have also been awarded two research grants to adapt the Mo-Buzz concept for preventing influenza among healthcare workers and secondary school children in Singapore. In the coming months, the COSMIC team will continue to observe usability and adoption of Mo-Buzz through a series of research studies, the findings of which will potentially inform further enhancements to the system.