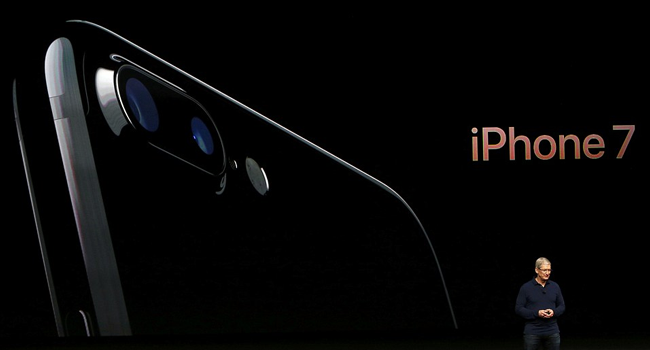 Apple has unveiled its long-awaited iPhone 7 an event in San Francisco yesterday, alongside the iPhone 7 Plus with a dual-lens camera and a "swim-proof" Apple Watch 2.

As expected, Apple has done away with the headphone socket on both iPhone models.

The iPhone 7 and 7 Plus will ship with a pair of wired headphones that plug into the charging port on the bottom of the device, as well as an adaptor for people who want to hang onto their old headphones.

The company also showed off a pair of wireless headphones, called AirPods, which can be purchased for an additional £159.

These can connect to both the iPhone 7 and Apple Watch 2 with just a tap, according to Apple, and switch "seamlessly" between entertainment and calls.

Both the iPhone 7 and 7 Plus have an IP67 rating, which means they are totally protected against dust and can be immersed in water to a depth of 1 metre.

They also feature a new home button which is "force-sensitive", meaning it provides haptic feedback when you use it in different ways.

Both phones have upgraded cameras. The iPhone 7 has a 12-megapixel wide angle camera, which Apple claims is 60% faster and 30% more energy-efficient than previous models, and has 4 LEDS in the flash.

The iPhone 7 Plus has an additional telephoto camera, which together with the standard 12-megapixel wide angle camera offers optical zoom at two times and up to 10 times digital zoom for photos.

Apple said the camera software would be updated later this year, allowing the iPhone 7 Plus camera to capture depth-of-field, and separate the background from the foreground to achieve amazing portraits once possible only with DSLR cameras.