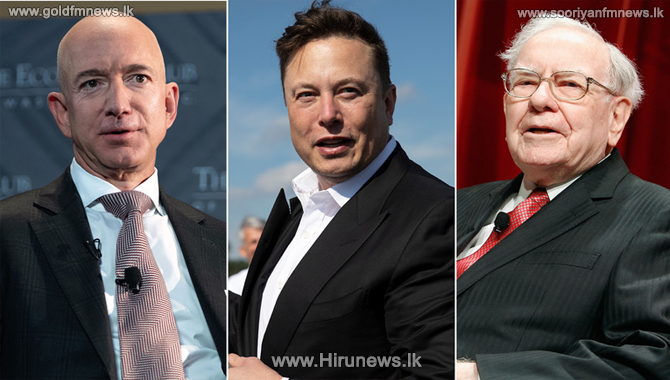 Details claiming to reveal how little income tax US billionaires pay have been leaked to an news website according to foreign media reports.

ProPublica says it has seen the tax returns of some of the world's richest people, including Jeff Bezos, Elon Musk and Warren Buffett.

A White House spokeswoman called the leak "illegal", and the FBI and tax authorities are investigating.

ProPublica said the richest 25 Americans pay less in tax - an average of 15.8% of adjusted gross income - than most mainstream US workers.

"They have enormous ability to find deductions, find credits and exploit loopholes in the system," he said. So while the value of their wealth grows enormously through their ownership of shares in their company, that's not recorded as income.

But there's more than that, he said: "They also take aggressive tax deductions, often because they have borrowed to fund their lifestyle."

He said US billionaires buy an asset, build one or inherit a fortune, and then borrow against their wealth. Because they don't realise any gains or sell any stock, they're not taking any income, which could be taxed.

"They then borrow from a bank at a relatively low interest rate, live off that and can use the interest expenses as deductions on their income," he said

Are these actions are perfectly legal?
The website said that "using perfectly legal tax strategies, many of the uber-rich are able to shrink their federal tax bills to nothing or close to it" even as their wealth soared over the past few years.
Bloomberg and Buffett, who have both supported raising tax rates for the wealthy, have both had $0 income tax bills. (Buffett, at least, has long acknowledged this, infamously saying he paid a lower tax rate than his secretary.)

Bloomberg, during his run for the 2020 Democratic presidential nomination, tangled with Sen. Elizabeth Warren of Massachusetts over whether the government should tax extreme wealth in addition to income.

How is this possible?
The report analyzes how this is possible, and the reasons are many. First, US tax law is focused on income and much of the superwealth is tied up in company stock or other investments that have real value but aren't taxable year to year.

Let's take a very simplified analysis. If the shares I own in the company I founded are worth 1bn at the beginning of the tax year and rise to a value of 2bn by the end of the tax year - how much income tax do I owe? Easy - zero. Because while I am twice as rich, I received zero income.

On the other hand, if I have zero assets, and I make US$ 30,000 in income, I will pay roughly US$6,000 in income tax and national insurance. That's why the revelations that some of the richest Americans paid little or no income tax may provoke outrage but should not come as a surprise. It's not comparing apples with apples.

Tax avoidance strategies
The report does show how the wealthy finance their lifestyles with loans taken against assets, like real estate or stocks, rather than realizing the value of an asset. They'll pay less to the bank in interest than they would to the government in income tax.

Carl Icahn, the investor, gave an interview to ProPublica about his tax returns and it printed this illuminating response:
"There's a reason it's called income tax," he said. "The reason is if, if you're a poor person, a rich person, if you are Apple — if you have no income, you don't pay taxes."

He added: "Do you think a rich person should pay taxes no matter what? I don't think it's germane. How can you ask me that question?"
But in these cases, the loans do act as the income.

Do they pay other forms of tax?
It's also true that with so much of their wealth tied up in stock, they effectively pay tax through their companies; however, the corporate tax rate of 21% is far lower than the top rate of 37% on income over $523,000 for individuals.

Even on the income the superwealthy do claim, often in the form of capital gains, they often pay a lower rate than Americans who make far less money.

Jesse Eisinger, senior reporter and editor at ProPublica, told the Today Programme: "We were pretty astonished that you could get [tax] down to zero if you were a multi-billionaire. Actually paying zero in tax really floored us. Ultra-wealthy people can sidestep the system in an entirely legal way."