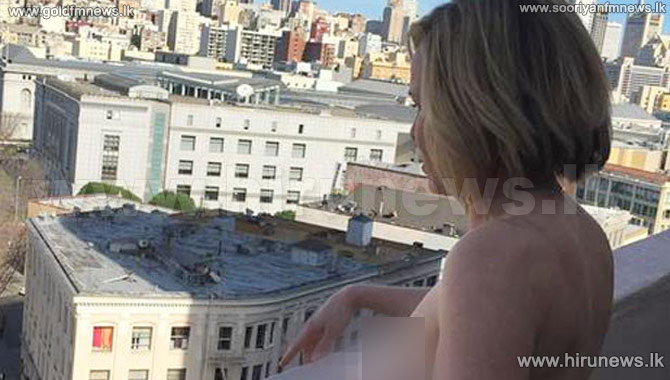 Chelsea Handler's boobs are back, and it looks like they're here to stay.

After repeatedly have her naked naughty pillows pulled off of Instagram, the comedian has found a social media website that seemingly won't take down her tatas, and that welcoming Internet space is Twitter.

Handler posted yet another memorable topless snapshot of her bare breasts enjoying a beautiful city view from a balcony this morning, and whaddya know? It's still up! She captioned the pic, "Thanks for having me, twitter." Yeah, thanks Twitter!

While many may be shocked to see her nakedness just out there on the worldwide web, Chelsea admitted she doesn't understand what the big deal is.

MORE: Check out other celebs' Instagrams on our E! Instagram Wall

"I just try to not overthink anything. Now I'm just in a war with Instagram trying to keep my topless photos on it," she shared with Elle magazine recently. "I don't understand why nipples are nudity. Who cares? Men can show their nipples, but if we have breasts we can't show them?"

She continued, "And so if you're flat-chested are you allowed to show your nipples? Is that better? And can I show one nipple, but not two? I don't even understand. Once somebody tells me I can't do something I have to figure out how to do it."

Handler is using Instagram to put pregnancy rumors to rest, though. Speculation started swirling after she posted a picture of her dog with the caption, "It's like a 24 hour watch. He must know I'm pregnant."

However, Chelsea didn't waste much time setting the record straight. She followed with apicture of herself lifting up her shirt to show off a flat tummy with the caption, "The last time I was pregnant was in this picture. Wake up, people. I would never do that to a baby."