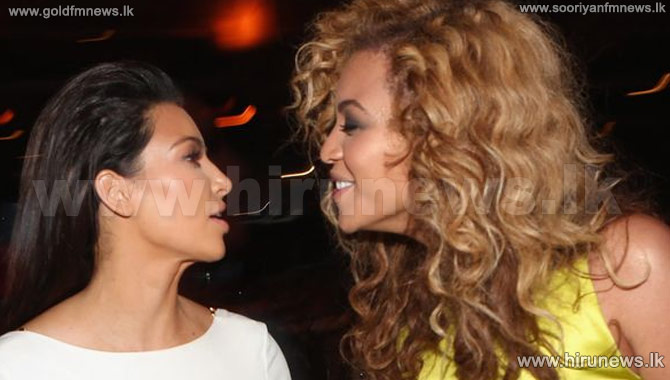 While supporting her husband, Kanye West, at his Adidas/Yeezy NYFW show, Kim Kardashian and Beyonce seemed to be rather chummy in the front row.

The two ladies have been rumoured to not be very pally, despite their partners (Kanye and Jay) being very good rapper friends.

As the first day of New York Fashion Week and the debut of Kanye's collaboration with Adidas.

Defo the most star-filled event in a while - even Bey and hubby Jay Z turned up - they didn't even rock up to Kimye's wedding.

Justin Bieber, Rihanna and Anna blooming Wintour were there too! Although Justin was relegated to the second row of the show. That's right, know your place Bieber.

Also Kanye and Kim's daughter was supporting at the show and even playing around with mummy Kim. How sweet and adorable is this...

Kim, 34, brought North, but the toddler apparently grew upset ahead of the show and was taken backstage.

Her sister, and the youngest of the Kardashian/Jenner clan, Kylie Jenner, 17, was among the models who featured in the presentation.

This time the pro, their other sister Kendall Jenner, watched and supported from the sidelines.

Kim was clearly proud of Kylie's efforts when she posted the picture below, alongside the caption: "Backstage!So proud of my baby!This moment is here!He has worked so hard on this collection!Kylie x Kim x Kanye x Anna."