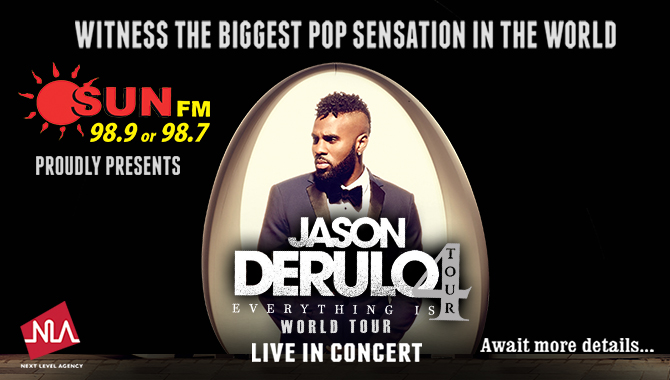 Jason Derulo, one of the biggest international POP sensations in the world, will be touching down in Sri Lanka, as part of his “everything is 4” world tour, presented by SUN FM.

The award-winning mega star will be accompanied by his full band and dancers that will create a visual and music explosion like Sri Lanka has never witnessed before.

What followed was global success with career defining hit singles like “want to want me “, “Dont wanna go home”, “It girl” “breathing”.
His latest single release “get ugly” in December 2015, from his fourth studio album, everything is 4, had over 17 million views on you tube and was a certified top 20 hit in the US rhythmic and main stream charts.

Over the weekend, on Valentine’s Day the single “Wiggles” hit 700 million views and his channel was at 3 billion views.
For the latest updates on the pop sensation’s LIVE concert in Sri Lanka, log onto www.sunfm.lk

Want to want me

The sky is the Limit