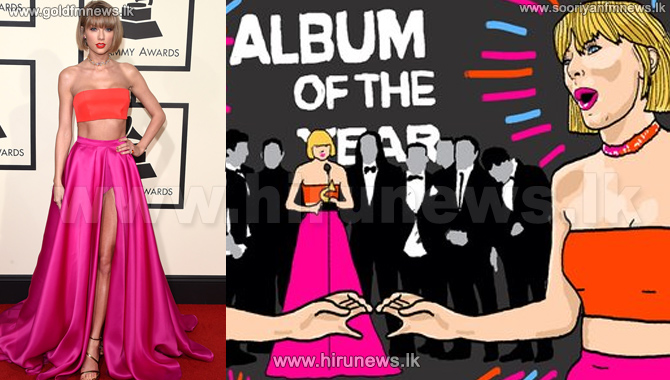 Taylor Swift’s 1989 took the album of the year award at the 58th Grammy awards at the Staples Center in Los Angeles last night.

Swift won the award, beating Kendrick Lamar, Chris Stapleton, Alabama Shakes and the Weeknd. Swift used her speech to encourage young women who feel defeated at times or discouraged by others.

Having opened the show with a version of her hit Out of the Woods, the singer made a defiant acceptance speech which seemed to allude to her argument with Kanye West earlier in the week. The rapper’s new song Famous, referring to Swift, claims: “I made that bitch famous.”

Swift pointed out in her speech that she is the first woman to win album of the year twice and added: “I want to say to all the young women out there – there are going to be people along the way who are going to try to undercut your success or take credit for your accomplishments or your fame.”

1989 also gifted Taylor Swift another award for the Best Pop Vocal Album as it defeated Piece By Piece by Kelly Clarkson, How Big, How Blue, How Beautiful by Florence and The Machine, Uptown Special by Mark Ronson and Before This World by James Taylor.

Swift also earned the award for the Best Music Video for Bad Blood featuring with Kendrick Lamar defeating LSD by ASAP Rocky, I Feel Love (Every Million Miles) by The Dead Weather, Alright by Kendrick Lamar and Freedom by Pharrell Williams.

Scroll down for Taylor Swift's direct and feminist speech and her gorgeous look at the Grammys.