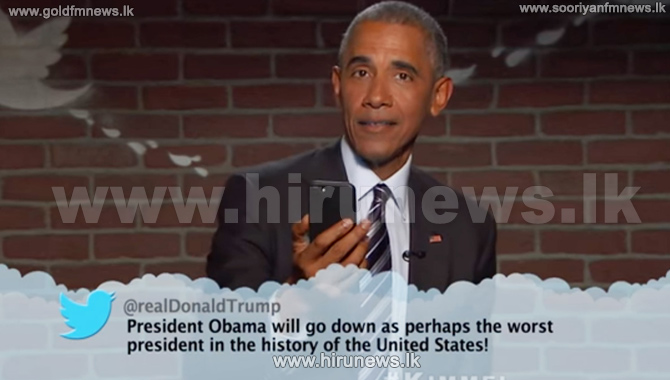 With the end of his presidency in sight, Barack Obama returned to Jimmy Kimmel Live! on Wednesday to take advantage of one of his last chances to read "mean tweets" as Commander-in-Chief.

The latest batch of 140-character insults drew links between the president and cheesy disaster films – "Barack Obama is the Sharknado of presidents: loud, stupid and over-hyped" – and criticized his eating habits: "I bet Obama likes mustard on his hot dogs because he's gross;" "Obama couldn't negotiate getting a Whopper without pickles." "Barack Obama is the Nickelback of presidents," another Twitter user declared, though this is in some ways an odd insult, because Nickelback have enjoyed massive commercial success.

President Obama kept his between-tweet commentary to a minimum. To a Twitter user who wrote, "bro, do you even lift?" he responded, "well, I lifted the ban on Cuban cigars – that's worth something."

He saved the best for last, though: after reading a tweet from Donald Trump where the GOP candidate wrote, "President Obama will go down as perhaps the worst president in the history of the United States," Obama coolly replied, "well, at least I'll go down as a president."

Obama first appeared on Kimmel to read mean tweets last March in a video that has since racked up more than 46 million views.