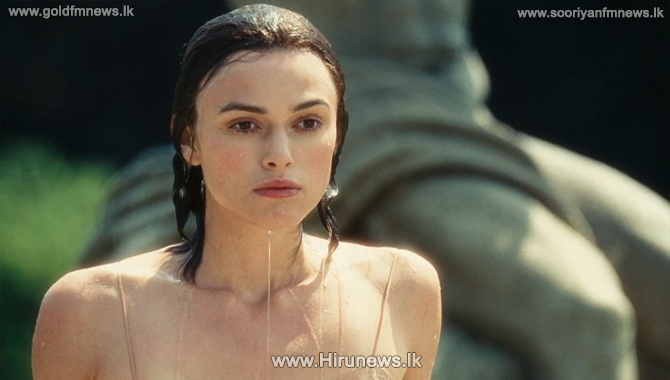 Keira Knightley has said that every woman she knows has been subjected to sexual harassment, from being flashed to groped, including herself.

She said this speaking to Harper's Bazaar magazine, the 36-year-old British actor branded the situation "depressing."

"Literally, I don't know anyone who hasn't been, in some way, whether it's being flashed at, or groped, or some guy saying they're going to slit your throat, or punching you in the face, or whatever it is, everybody has," Knightley said in an interview for the magazine's July issue, which goes on sale Wednesday.

Knightley, known for her starring roles in Pirates of the Caribbean and Pride and Prejudice, said that after the murder of Sarah Everard outside London in March, when women started speaking out about the precautions they take when walking home alone, she said realized she did the same.

"It was when women started listing all the precautions they take when they walk home to make sure they're safe, and I thought, I do every single one of them, and I don't even think about it," Knightley said.

A survey by UN Women UK showed that more than 70% of women had experienced sexual harassment in public spaces. According to the poll released in March 2021, the figure rose to 97% among women aged 18 to 24.

Knightley said she appreciated Baroness Jenny Jones, a Green Party life peer in the House of Lords, for suggesting a curfew for men. "Men were outraged, and you think but there's a curfew for women and there always has been," she said.

During the interview, Knightley was harassed by a "lone male stranger" who shouted "You look very young!" at her and followed her and journalist Lydia Slater.

Although the actress said she had not worked in a year, her next release will be the film Silent Night, which wrapped filming just before the first Covid-19 lockdown was imposed in the United Kingdom.

In conversation with director Lulu Wang and writer-producer Diane Solway on the Chanel Connects podcast, Knightley credited the “male gaze” and her own personal vanity with the decision.

“If I was making a story that was about that journey of motherhood and body acceptance, I feel like, I’m sorry, but that would have to be with a female film-maker,” Knightley said. “I don’t have an absolute ban, but I kind of do with men.”

She continued: “I don’t want it to be those horrible sex scenes where you’re all greased up and everybody is grunting. I’m not interested in doing that.

“I feel very uncomfortable now trying to portray the male gaze. Saying that, there’s times where I go, ‘Yeah, I completely see where this sex would be really good in this film and you basically just need somebody to look hot.’