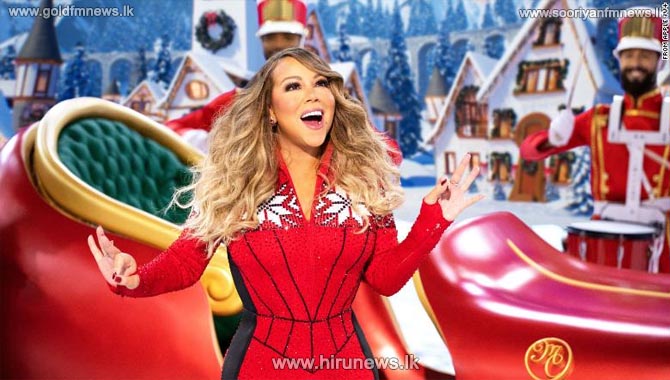 The queen of Christmas is back with a new holiday spectacular – and a new Christmas song.

Mariah Carey, who graced the world with "All I Want For Christmas Is You" 27 years ago and last year debuted "Mariah Carey's Magical Christmas Special," will unveil “Mariah’s Christmas: The Magic Continues" on Apple TV+ in December, the streaming service announced Tuesday.

The special will mark her first and only performance of her new holiday single, "Fall in Love at Christmas," featuring Khalid and Kirk Franklin.

The official trailer of the Mariah Carey’s new holiday special, Mariah’s Christmas: The Magic Continues. A follow-up to last year’s installment, The Magic Continues is set to release globally on Apple TV+ on December 3. Gilded gowns and beautiful sets serve as a reminder that Carey is synonymous with glitz and glamour.

This year’s tidings include a new original single, "Fall In Love At Christmas," which Carey will perform with pop phenom Khalid and 16-time Grammy winner Kirk Franklin in its debut. Carey will also perform a new rendition of "Christmas (Baby Please Come Home)" and open the special with her holiday classic, "All I Want for Christmas Is You." Other announced guests in this year's celebration will include Apple Music radio DJ Zane Lowe and Carey's twins, Moroccan and Monroe. In the trailer, amid a slew of stylish dancers, Carey tells Lowe:
The singer got an early start on the holiday season, announcing Monday that "it's time" to get into the holiday spirit with her iconic Christmas song.

Mariah Carey posted a video to social media in which she walks out of her front door wielding a candy cane-striped baseball bat as a clock chimes. Three pumpkins outside are carved to read "IT'S NOT TIME," but the pop icon smashes the middle one as her 1994 Christmas classic begins playing.

It's time," she sing-songs, holding up Christmas ornaments while showing off a sparkly red Santa-inspired getup complete with white fur trim and a black belt with a gold buckle.

“The memories of my childhood Christmases are kind of bittersweet because I had such a dysfunctional, brutal family. It was not always fun but I always hoped it would be – and I remained an optimist about it,” she explains, “My mother got me into understanding Christmas, making mulled wine and singing carols with her friends. Though I lived in a very small and humble place, that made that time of the year special for me. So now, I’m in charge of the holiday-planning, I do whatever I can to make it special for my kids [twins Moroccan and Monroe] and, selfishly, for me. I take a few moments and quietly enjoy feeling the spirit.” She said.

An NBC News analysis of 15 years of Last.fm listenership data, which tracks tens of millions of songs played daily by millions of members around the world, found that the popularity of “All I Want for Christmas Is You” was once reserved for late November and December. But in the past decade — and the past three years, in particular — increased listenership for it has started in early November and even late October.

In the late 2000s, people listened to Carey’s song more than average approximately 31 days in the final three months of the year. In the early 2010s, that number increased to 40 days, and in the past three years that figure has stretched as high as 78.