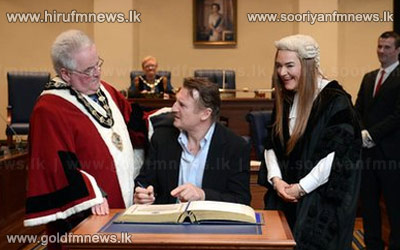 Liam Neeson has been receiving the Freedom of the Borough from Ballymena Borough Council at a ceremony in the town.

The Oscar-nominated actor is best known for starring roles in the Star Wars film The Phantom Menace, Schindler's List, Taken and Michael Collins.

The Freedom of the Borough is the highest accolade the council can award a citizen.

He exchanged a few words with the crowd waiting to greet him and posed for photographs.