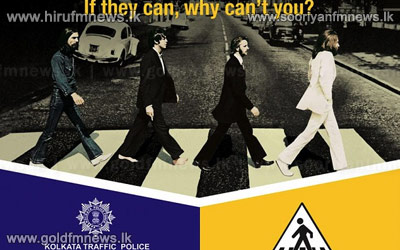 Police in the eastern Indian city of Calcutta are using the picture on the cover of the iconic Beatles album Abbey Road in a campaign to enforce road safety.

The picture shows the band members walking in single file on a zebra crossing in north London's Abbey Road.

The slogan for the campaign reads: "If they can, why can't you?"

The Beatles were photographed on Abbey Road in Ian Macmillan's famous cover shot for the 1969 album.

The crossing is outside the Abbey Road studios, where the band recorded much of their music.