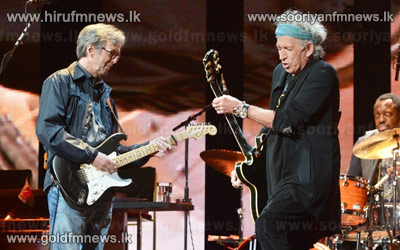 Guitar deity Keith Richards made a surprise appearance to perform with Eric Clapton on his Crossroads festival.

The Rolling Stone received perhaps the most sustained standing ovation of the night as he joined his old pal toward the end of Crossroads, a two-night concert festival at Madison Square Garden that brought together a dazzling array of guitar masters, from John Mayer to Jeff Beck to legends like Buddy Guy, and of course, Clapton and Richards.

Richards — whose Stones announced another tour earlier this month — flashed his typical wry smile to the crowd before joining Clapton in playing the blues standard and Clapton favorite "Key to the Highway."