Profiles in History to an online auction regarding letters and manuscripts of "The Property of a Distinguished American Private Collector." 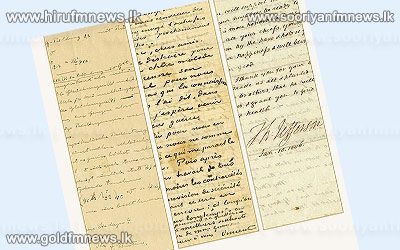 On May 30th, Profiles in History will run an online auction of 250 letters and manuscripts from “The Property of a Distinguished American Private Collector.”

The sale will be the second in a series of auctions. The emotional letter from Marilyn Monroe is among the offerings in May and is estimated to sell between 30,000 and 50,000 dollars.

Even more revealing than her images is this letter she wrote to Lee Strasberg, where she compares acting to suicide.

The first auction (Part I) was held in December. Highlights from Part II include a letter from Mata Hari discussing her affair with a Russian spy.