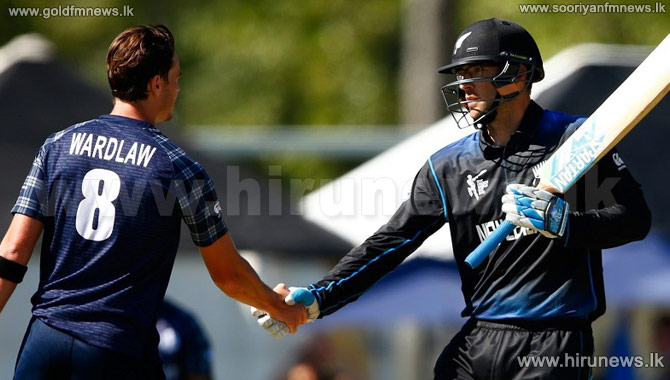 New Zealand huffed and puffed to a three-wicket win against a spirited Scotland but jumped to the top of Pool A with their second consecutive victory in the cricket World Cup on Tuesday.

The Kiwi pacemen, led by Trent Boult (2/21), set up the win as they bundled out Scotland for a measly 142 in 36.2 overs after winning the toss at University Oval ground.

Veteran spinner polished of the lower-order after pacers Boult, Tim Southee (2/35) and Corey Anderson (3/18) had unsettled the Scotland innings.

Scotland owed their total to Matt Machan (56) and Richie Berrington (50), who struck fighting fifties. It was too small a total to defend but Scotland paceman came up all guns blazing as they removed half of the Kiwi batting line-up in 21 overs.

The wicket had good bounce and the batsmen required to apply themselves throughout and a little lapse of concentration resulted in loss of wicket.

Kane Williamson top-scored for the Kiwis with his 38-run knock while Grant Elliot managed 29 amidst an inexplicable collapse. The Kiwis won with 25.1 overs to spare but the way they achieved the target was far from convincing.

Nevertheless, it was their second win after a comprehensive victory against Sri Lanka in the opening match of the tournament.

Scotland pace duo of Iain Wardlaw (3/57) and Josh Davey (3/40) shared six wickets between them, making life tough for the Kiwis.

Earlier, Boult rocked the Scotland top-order by taking two wickets in two balls as he trapped opener Calum MacLeod and Hamish Gardiner before the batsmen could open their accounts.

Tim Southee (2/35) inflicted more damage when he accounted for other opener Kyle Coetzer (1) and rival skipper Preston Mommsen (0) in consecutive balls in the fifth over, leaving the opponents reeling at 12 for four.

From here the resurrection of the Scotland innings began as Matt Machan (56) and Richie Berrington (50) dug their heels in for a 97-run stand for the fifth wicket.

Machan faced 79 balls and hit eight boundaries including a six while Berrington took 80 balls for his half-century which had four fours and a six.

Left-arm paceman Anderson broke the stand when he had Machan caught by Brendon McCullum and the scorecard was reading 109. Anderson added two more wickets to his kitty and Vettori took last three wickets as Scotland innings folded quickly.