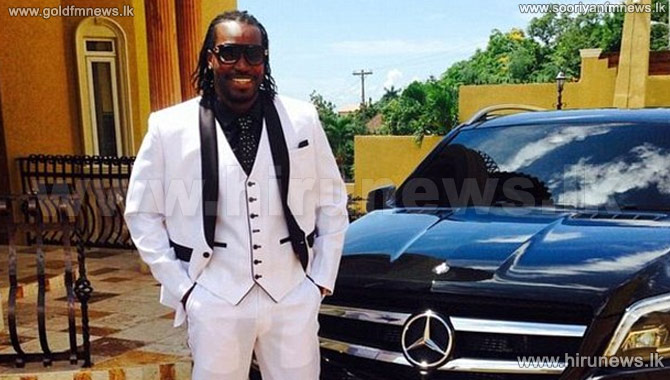 Chris Gayle proves he really is 'World Boss' with double century at Cricket World Cup... and even after a match, play doesn't stop

· Gayle is flamboyant both on and off the field

· He has shared many Instagram pictures of his partying

· Chris Gayle calls himself 'World Boss' and after his record-breaking double century at the Cricket World Cup against Zimbabwe it's impossible to disagree.

Gayle scored 215 off just 147 deliveries to become the first man ever to pass 200 at the game's biggest tournament. The 35-year-old Jamaican smashed an eyewatering 16 sixes on top of 10 fours as he announced his arrival at this World Cup with a crash, a bang and most definitely a wallop.

Even the way Gayle was eventually dismissed encapsulates why he is one of the great characters of modern sport. He needed to get through just one final delivery to earn the distinction of carrying his bat through the entire innings - a badge of honour that would be cherished by any opening batsman. But was survival on his mind? Not a chance. Gayle tried to belt the ball out of the park.

The ball soared high and fell into the hands of the fielder at midwicket, but did Gayle care? What do you think?

'I always feel happy - you know why? Because I don't expect anything from anyone! Expectations always hurt,' he says on his Twitter feed. He's got plenty to feel happy about, too. His latest act of brutal batting brilliance was his 22nd ODI century, and he is an icon of his sport and homeland.

'Chris Lion' - another of his self-anointed monikers - proves just why Caribbean cricketers are among the coolest cats in the world of sport. At the crease Gayle ensures the swashbuckling spirit of Sir Viv Richards lives on. And when he's away from the field of play, that doesn't mean that the play has to stop.

Just like Usain Bolt, another famous sporting resident of Kingston Town, Gayle likes to party until the early hours, enjoy his food heartily, and dance whenever possible. His Gangnam Style jig after West Indies won the T20 World Cup in 2012 has gone down in legend.

Gayle even owns his own sports bar in his hometown. 'From the Living Legend Chris Gayle comes Triple Century Sports Bar. Kingston's HAPPY PLACE place for Sports, Food and Drinks,' it promises its customers. Gayle certainly looks in a happy place when pictured surrounded by the many stunning women who seem to frequent the establishment.

He seems to like the odd tipple too. OK, make that more than the odd tipple, judging by his enthusiastic sharing of pictures of beer bottles, champagne flutes and rum cocktails.

The name of the bar is a nod to another of Gayle's stunning achievements. After his marathon innings of 317 against South Africa in 2005 and then his 333 against Sri Lanka five years later, Gayle became only the fourth man in history to score two triple centuries in his Test career. The others? Don Bradman, Virender Sehwag and Brian Lara.

‘I’m phenomenal,’ writes Gayle on another of his Twitter posts, in which he poses wearing a pair of comedy oversized glasses and, of course, an even bigger smile. You're not wrong, Chris.  (Daily Mail)