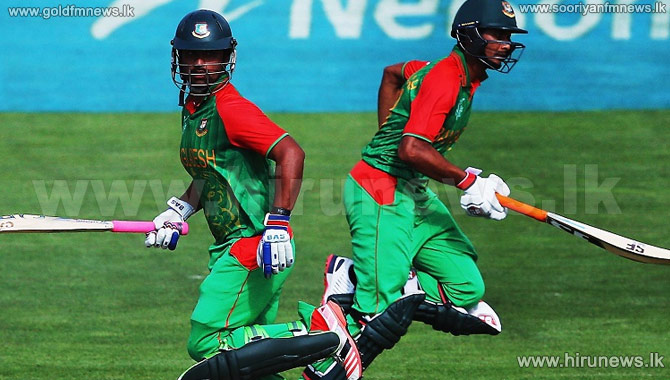 In a Pool A match of tumbling national records, Bangladesh overtook Scotland’s 318 with 11 balls to spare. Each time Scotland felt they had made a significant breakthrough as Bangladesh narrowed in on the target, up stepped another batsman to maintain the pace.

Tamim Iqbal top scored with 95, Mohammed Mahmudullah added 62 and Mushfiqur Rahim produced 60 before Shakib Al Hasan (not out 52) and Sabbir Rahman (not out 42) finished the game off.

Batting is Bangladesh’s strength and to haul in Scotland’s 318 they played without panic to produce the second highest successful chase by any team – behind Ireland’s 329 against England in 2011 – in a World Cup match.

Bangladesh must now beat either a floundering England side, or so far unbeaten New Zealand, in their last two games to be assured of a quarter-final berth.

Scotland did not make it easy for Bangladesh but for the second game in succession, following last week’s loss to Afghanistan, they succumbed to the pressure.

Bangladesh started the chase one-man down after Anamul Haque dislocated his right shoulder cutting off a Preston Mommsen boundary after Scotland were sent into bat first.

Tamim, who became the second Bangladeshi to pass 4,000 ODI runs, and Mahmudullah put on a Bangladesh World Cup record partnership of 139, and following Mahmudullah’s dismissal in the 24th over Mushfiqur kept the pace up.

Tamim, who produced miserable totals of nought and 19 in his previous two World Cup innings, found his form when Bangladesh needed it and was five runs short of a century when he was trapped leg before wicket.

Bangladesh appealed but there was never any doubt he was plumb in front, and at 201-3 with 19 overs left they remained in charge and with a chance to emulate their effort at the 2007 World Cup when they made the final eight.

However, for Scotland after 12 matches and 16 years since they debuted in cricket’s one-day showpiece tournament they have yet to savour a win and are definitely now out of the competition.

Their hopes were boosted when man-of-the-match Kyle Coetzer made 156 in what was the first World Cup century by a Scotland batsman, heading the previous best of 76 by Gavin Hamilton against Pakistan in 1999, and was their second-best individual ODI score.

Scotland’s 318-run total was their third highest ODI total and their best at a World Cup, surpassing the 210 against Afghanistan last week.

But, like the West Indies and United Arab Emirates before them, they failed to defend a total on the Saxton Oval wicket.

Josh Davey was the most successful bowler for Scotland with two for 68, while the most productive bowler for Bangladesh, Taskin Ahmed, took three for 43. (Cricbuzz)