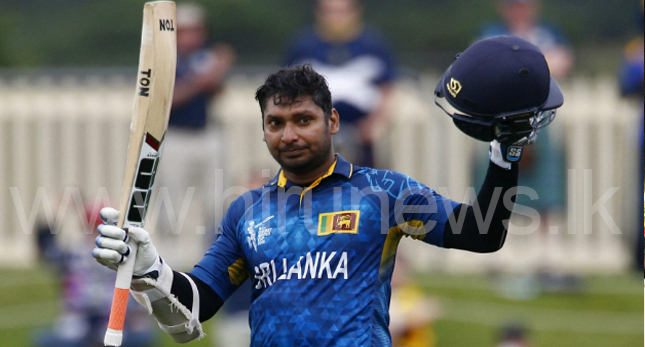 The left-hander made 124 off 95 balls and Tillakaratne Dilshan scored 104, the pair adding 195 for the second wicket after Sri Lanka won the toss and elected to bat at the Bellerive Oval.

Skipper Angelo Mathews smashed 51 off 21 balls at the end, slamming four sixes in a row off spinner Matt Machan before being caught next ball on the mid-wicket fence.

“I am really enjoying it so far, I want to carry my form on for a few more games,” said Dilshan.

“It’s a great experience to bat with Kumar, he’s a great player and we’ve put on a lot of partnerships over the years.” Sri Lanka, who were 216 for one at one stage, lost eight wickets for 147 runs as the later batsmen attacked the inexperienced Scotland attack.

Dilshan and Sangakkara came together in the sixth over after Lahiru Thirimanne had been snapped up in the slips off Alasdair Evans for a scratchy four off 20 deliveries.

Scotland had to wait till the 35th over for their next success as the pair toyed with the bowling in good batting conditions.

Sangakkara is the leading scorer in the tournament with 496 runs from six games, while Dilshan is second with 395 runs.

Both batsmen reached their centuries off successive balls from Kyle Coetzer in the 34th over, Dilshan taking a single to record his second hundred in the tournament before Sangakkara followed next ball.

Sangakkara, who plans to leave one-day cricket after the World Cup, had made 105 not out against Bangladesh, an unbeaten 117 against England and 104 against Australia.

The prolific 37-year-old surpassed six players who had scored three ODI centuries in a row.

They were Zaheer Abbas and Saeed Anwar of Pakistan, the South African trio of Herschelle Gibbs, AB de Villiers and Quinton de Kock, and Ross Taylor of New Zealand.

Dilshan, aged 38, followed his unbeaten 161 against Bangladesh with his fourth World Cup century before he holed out in the deep off seamer Josh Davey.

Davey then struck two huge blows soon after, getting rid of Mahela Jayawardene and Sangakkara off successive balls as Sri Lanka slipped from 216 for one to 244 for four.

Jayawardene, 37, who will also retire after the World Cup having already quit Test cricket, made two when he was caught at mid-off by Calum MacLeod.

Sangakkara edged the next delivery to the wicket-keeper, sparking wild celebrations among the Scottish supporters in the stands.

The match gives Sri Lanka a chance to fine-tune preparations for next week’s quarter-finals for which they have already qualified.

Scotland are out of the race, having lost all their four matches so far.

Sri Lanka are beset with injuries, with seamer Dhammika Prasad ruled out of the tournament before it started and Jeevan Mendis, Dimuth Karunaratne and Dinesh Chandimal sidelined during it.

Veteran left-arm spinner Rangana Herath is yet to recover from a finger injury and missed the match. Fast bowler Dushmantha Chameera and batsman Kusal Perera made their World Cup debuts for Sri Lanka.