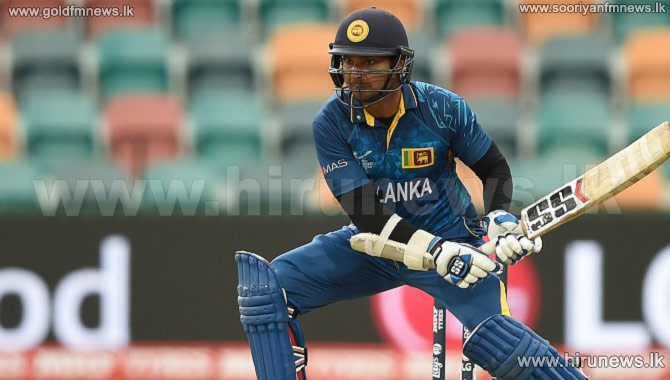 Stephen Brenkley pays tribute to a great player and person in Sri Lanka's humble hero Kumar Sangakkara, who, as he enjoys a last hurrah, is arguably the best bat since Donald Bradman.

Towards the end of his great speech at Lord’s four years ago, Kumar Sangakkara offered an inkling of what drives him. By this time the audience was already rapt to the point of eating from his hand and soon, to a man and woman, it would be on its feet cheering.

“In our cricket we display a unique spirit, a spirit enriched by lessons learnt from a history spanning over two-and-a-half millennia,” Sangakkara said. “In our cricket you see the character of our people, our history, culture and tradition, our laughter, our joy, our tears and regrets.

“It is rich in emotion and talent. My responsibility as a Sri Lankan cricketer is to further enrich this beautiful sport, to add to it and enhance it and to leave a richer legacy for other cricketers to follow.”

At this World Cup, we are witnessing the final days of Sangakarra, the international cricketer. He has played with a fearless determination and freedom, as if impelled by those words he delivered in MCC’s annual Spirit of Cricket lecture in 2011.

This is his last hurrah (and what a hurrah) as a one-day player and later this year he will withdraw from Test match cricket. He will do so as the second heaviest international run scorer. Only Sachin Tendulkar’s combined total of 34,357 is greater than his 27,774.

Sangakkara has done this almost by stealth. Everyone has always known that he was a considerable run-getter because the scoreboards said so; few cottoned on quite how prodigious, even as it has been going on. Almost always prolific in the upper middle order, his batting has become routinely resplendent as he gone through his thirties. He is in that happy, indefinable state where the bowlers seem to yield to his will and can barely stop themselves feeding his strengths.

None did so more obligingly than England’s, who allowed him to cut and pull with abandon, which then opened up the way for his fierce driving. Sangakkara has become the first man to score hundreds in four consecutive one-day innings (and in the World Cup to boot), a sequence of three having been achieved six times before.

It will have to end sometime but most supposedly neutral observers here are willing to drop that independence for a day or so to see Sanga and Sri Lanka reach the final. They play their quarter-final against South Africa on Wednesday. He will leave the game as one of its most eloquent contributors, in every sense.

Sangakkara first entered the English psyche in early 2001 during an ill-tempered Test series in which the young shaver, as he then was, played a full part. He regrets some (not all) of what he got up to then, but it set him apart immediately and retrospectively confirms that he will not see the Sri Lankan cricketer brow-beaten or cowed.

In the first Test of that series at Galle, Sangakkara was fined for excessive appealing. In the second at Kandy, his hometown, there were unwelcome scenes which involved Sangakkara and, of all people, Michael Atherton, on his last tour and the most temperate of big-time cricketers.

Sangakkara was young, anxious to make his mark as a cricketer and, as importantly, as a Sri Lankan cricketer and said some things both while keeping wicket and batting which should have been left unsaid. Atherton was probably surprised to be so ruffled. Both were fined.

Even then, Sangakkara was utterly charming, engaging with the English media lucidly and amiably. Under the stands at Kandy, before the match, it was less an interview, as this reporter recalls, than an audience.

What a cricketing life he has had, from being at Trinity College, Kandy, it was recounted by a teacher, “a rather naughty child,” though a high-achieving one in all aspects. He and his team-mates flew home from a tour of New Zealand in late 2004 after the tsunami struck their country.

Sangakkara, along with his friends and colleagues Muttiah Murilatharan and Mahela Jayawardene, toured the island visiting the distressed coastal villages and dispensing succour and food parcels.

In March 2009, the Sri Lanka team bus was attacked by gunmen as it went to the ground in Lahore for the third day of the second Test against Pakistan. Seven people died and several of the team were injured, including Sangakkara who had shrapnel embedded in his shoulder. The Test was abandoned, international cricket has not been played in Pakistan since.

Sangakkara has scored 38 Test hundreds, at least one against all Test-playing nations, and has a batting average of 58.67. In the 82 of the 130 Tests in which he has not kept wicket that rises to 69.35. Only Don Bradman, who never kept wicket in his 52 Tests, has a higher average in those terms. Sangakkara and Jayawardene share the record for the highest partnership in Tests, of 624, for the third wicket in Colombo in 2006.

As a one-day player Sangakkara has moved with the times. His overall scoring rate is 79.04 but that has moved up to 93.14 in the last two years. Now he is supplying the acceleration as well as the ballast.

It was always evident how proud he was to be Sri Lankan and to be a member of its national team. He is married to his childhood sweetheart and they have five-year-old twins, a son and daughter. Never a press conference goes by when he fails to mention his great friend, Jayawardene, or pay tribute to the work of the kids in the team.

But that pride, that ingrained loyalty and faith, that honour, could be seen as the most important element of his life that night at Lord’s. He told of the history of the country and of its cricket. He told how everything changed the day Muralitharan was called for throwing in Australia in 1995 (“Murali was no longer alone. His pain, embarrassment and anger were shared by all.”)

He told of the significance of Arjuna Ranatunga in making the team play like Sri Lankans and not like colonial underlings. He told of returning to the country after the terrorist incident in Pakistan and being stopped at a checkpoint a week later. The soldier asked him how he was and Sangakkara said he was fine and that he, the soldier, put his life on the line every day.

“That soldier looked me in the eye,” Sangakkara said, “and replied: ‘It is OK if I die because it is my job and I am ready for it. But you are a hero and if you were to die it would be a great loss for our country.’

“I was taken aback. How can this man value his life less than mine? His sincerity was overwhelming. I felt humbled. This is the passion that cricket and cricketers evoke in Sri Lankans. This is the love that I strive every day of my career to be worthy of.”

It was humbling to hear, not least because it was a raison d’être for international sport, one that, for one reason or another, could not be delivered by half the England team. Of his 20 million compatriots, Sangakkara said: “They are my foundation, they are my family.

“I will play my cricket for them. Their spirit is the true spirit of cricket. With me are all my people. I am Tamil, Sinhalese, Muslim and Burgher. I am a Buddhist, a Hindu, a follower of Islam and Christianity. I am today, and always, proudly Sri Lankan.”

It is a long shot and New Zealand remain the emotional favourites to win this World Cup – but a Sri Lanka victory would be fine. Just fine. (The Independent)