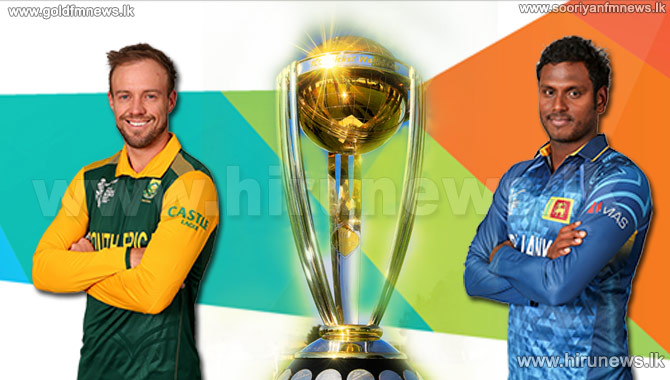 South Africa require another 4 runs with 9 wickets and 32.2 overs remaining

12.59 South Africa require another 94 runs with 9 wickets and 43.2 overs remaining. The umpires have decided to take the supper break. The first session was extended because of the rain earlier. South Africa are off to a very good start. Although Amla has been dismissed, the momentum is still with them.

12.58 Malinga to Amla, OUT, Kula runs around, dives and takes a beautiful catch at deep third man! The umpires are checking the front foot, has he overstepped?! This is seriously tight! Seriously tight. And the benefit of the doubt goes to the bowler. Amla's gone. It was short and wide, he went for a cut and didn't bother with keeping it down. The fielder ran around, had his eyes on the ball all the way and claimed it excellently. And that's the supper break

12.14 Sri Lanka were all out for 133 in 37.2 overs against South Africa in the ICC World Cup first quarter-final played at the Sydney Cricket Ground (SCG)

12.14 Sri Lanka then got a bit of respite as it started to rain and play was stopped for a brief period. South Africa should be able to chase down this target. For Sri Lanka, it is imperative that they take wickets with the new ball to have any chance of winning the game.


11.40 Morkel to Sangakkara, OUT, short and wide, Sanga goes for a cut..... And holes out at deep third man! He was trying to get it finer. And it's pouring down! That was sudden. It doesn't look like it will last, but hey... South Africa and knockouts! There is a reserve day from the quarter-final onwards though


11.30 Duminy to Kaushal Lbw, OUT, two in two, make that three in three! It's a hat-trick! JP is mobbed! This was a good length ball but doesn't turn as much. Kaushal was camped deep in his crease and was playing all around it. Plumb in front

11.28 Duminy to Kulasekara, OUT, Kula walks! This was flighted outside off, doesn't quite turn, the batsman plays for it. His face was closed, he was looking midwicket. Instead the deflection is pouched extremely well by de Kock. Stayed low when he needed to


11.25 Imran Tahir to NLTC Perera, OUT, taken at slip! Cramps him for room, his slider gets on quickly to Thisara who was trying to back away and punch into the covers. Only ends up with an outside edge that sits snugly in slip's hands. Had a little pit stop at the keeper's gloves in between


11.20 Duminy to Mathews, OUT, poor shot! Runs at the bowler, tries to whip a flighted delivery from way outside off through midwicket. He should have lifted it over the infield, or kept it all along the ground. Not some in-between flick. Throws his head back as Faf takes another dolly. JP has been so tight, he's not allowed the slightest release of pressure and gets just rewards. That's also drinks

10.40 Imran Tahir to Jayawardene, OUT, quick, on middle, skids on and Mahela has presented a simple catch to short midiwcket. Du Plessis is elated with the dolly but of course, no one can compare with Tahir's celebrations. Goes off for another lap of the city. The pressure was piling on and on and out came this shortish delivery. Mahela thought it was the release, but then realised he did not have any room. Was caught in two minds and in the end gave catching practice


10.26 Imran Tahir to Thirimanne, OUT, Tahir goes on a run towards deep midwicket. Huge wicket. Thirimanne is gone. He has looked superb so far. A legbreak from round the wicket, pitches on a length, just outside off, Thirimanne looks for a single to long-on, and the ball stops a little. He is early into the shot, the ball has bounced too. Off the high part of the bat it lobs back to the left of Tahir who dashes across Sanga and takes it two-handed

9.20 Steyn to Dilshan, OUT, they've got the openers! And it's that phenomenal South Africa fielding again! Dale Steyn looks like his forehead is made of veins and nothing but. Back of a length delivery, not quite wide enough for the slice behind point. But Dilshan goes for it and gets a thick outside edge. Faf is at second slip, he sees the ball dying as it comes to him so he dives forward and plucks a beauty!

9.06 Out walk Tillakaratne Dilshan and Kusal Perera, yet another opening pair for Sri Lanka. South Africa are in a huddle in one corner.

8.32 Sri Lanka won the toss and elected to bat

8.25 Dimuth Karunarathna wishes via twitter to Kumar Sangakkara and Mahela….