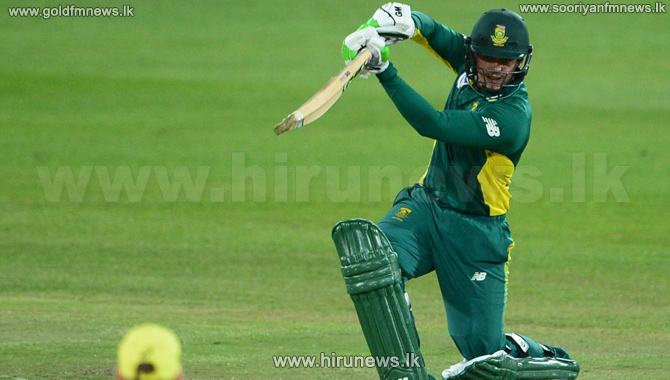 Quinton de Kock became the holder of South Africa's second-highest individual score in ODI cricket with a career-best 178 as his side eased to a series opening victory over Australia. De Kock steered South Africa to the third-highest successful chase at SuperSport Park and ensured they drew first blood in a weekend of clashes against Australia.

Sandwiched between ODIs on Friday and Sunday is a Rugby Championship fixture on Saturday. All the matches take place on the Highveld, de Kock's stomping ground, and on Friday night, he owned it.

None of the Australian bowlers were spared de Kock's aggression. He took on pace and spin, anything on the pads or overpitched, the short ball and the wide ball.

His was an innings that started with impeccable timing and placement and turned into belligerent bludgeoning, especially on the leg side. More than two-thirds of de Kock's runs came in that area, including nine of his eleven sixes and he made Australia's 294 appear utterly inadequate.

On a fairly flat pitch and a fast outfield, Australia should have breached 300 and, given their start, could have been eyeing many more. Australia were 88 for 1 in the 13th over before Andile Phehlukwayo pulled them back. He took 3 for 16 in four overs and finished with a career-best 4 for 44 in just his second ODI to lead a seam attack whose experience trio of Dale Steyn, Wayne Parnell and Kagiso Rabada all had off days.