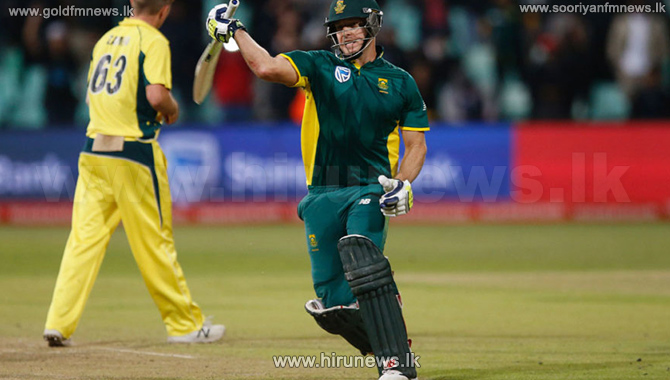 South Africa completed the second-highest run chase in one-day international history as they beat Australia by four wickets in Durban.

David Warner and Steve Smith both hit centuries as Australia reached 371-6 in their 50 overs at Kingsmead.

But an unbroken seventh-wicket stand of 107 by David Miller (118 not out) and Andile Phehlukwayo (42 not out) saw the Proteas home with four balls to spare.

South Africa now have an unassailable 3-0 lead in the five-match series.

The highest successful one-day international run chase was also made by South Africa, who hit 438-9 - against Australia - in Johannesburg in 2006.

Eight of the top 10 successful ODI run chases have now been achieved against Australia.

The third ODI between England and Ireland is currently being played in Southampton.Ireland won the toss and elected to field. Read More

Cricket Australia said today it has put on hold their three-game T20I series against the West Indies which was scheduled to be held in October.Matches... Read More

Delay in payment to Twenty20 players

The International Cricket Council (ICC) says that about a third of the players who took part in Twenty20 leagues around the world have not been paid.According... Read More