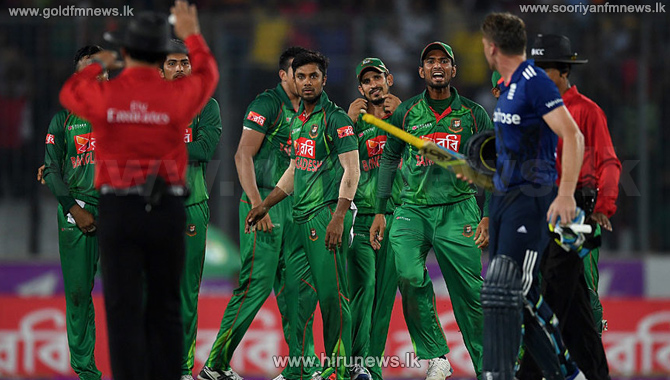 Bangladesh captain Mashrafe Mortaza and batsman Sabbir Rahman were fined 20% of their match fees yesterday for an altercation with rival skipper Jos Buttler in their team’s victory over England in the second ODI.

The International Cricket Council (ICC) also gave Buttler an official warning for his reaction to Mortaza and Sabbir’s celebrations following his dismissal after a TV review which proved pivotal in Sunday night’s match in Dhaka.

After England made a poor start in their reply to Bangladesh’s total of 238-8, Buttler was threatening to turn the match on its head with a run-a-ball innings of 57.

The on-field umpire had initially turned down Taskin Ahmed’s lbw appeal against Buttler, but Bangladesh sought a television review which confirmed the ball hit him plumb in his back foot and left England 123-7.

The verdict triggered lively celebrations in the Bangladesh camp, with several players exchanging words with the batsman as he made his way back to the pavilion, forcing the umpires to hastily intervene.

“The Bangladesh players overstepped in their celebration of Jos Buttler’s wicket, which prompted an inappropriate reaction from the dismissed batsman,” said match referee Javagal Srinath in an ICC statement. “We all want to see high intensity on the field of play, but only as long as it is not provoking or antagonising or disrespecting the opponent.”