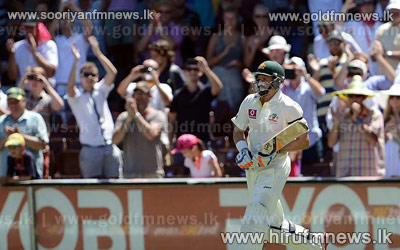 Sri Lanka’s hopes of recording their first Test victory on Australian soil faded away as the Aussies sealed a 3 nil whitewash in Sydney.

Earlier on Dinesh Chandimal batted with maturity in an unbeaten knock of 62 as he batted with the tail to put on a respectable target of 141.

Chandimal put on a 41 run partnership for the last wicket with Nuwan Pradeep who made 9 as Sri Lanka were all out for 278.

In reply Australia lost David Warner for a duck off the bowling of Suranga Lakmal.

Sri Lankans were able to make breakthroughs from time to time with Rangana Herath taking 3, but 141 runs was not enough at the end.

Mike Hussey retired from Test Cricket in style as he remained at the non strikers end as Mitchel Johnson took a single to take Australia to 141 for 5.