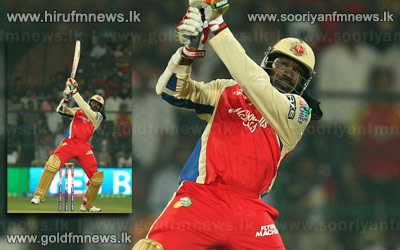 Royal Challengers Bangalore, inspired by Chris Gayle and indebted to Vinay Kumar, made a winning start to their IPL 6 campaign in nail-biting manner by beating Mumbai Indians by two runs at the M Chinnaswamy Stadium yesterday.

Royal Challengers scored 156 runs in their allotted 20 over.

Defending 10 runs off the last over of Mumbai's innings, Vinay removed half-centurion Dinesh Karthik and Ambati Rayudu in consecutive deliveries before bowling a blockhole-length final ball to Kieron Pollard to send the RCB dugout into a tizzy.

But Bangalore's win would not have been possible without the batting heroics of the talismanic Gayle: where the bombastic Jamaican made 92 off 58 balls, the rest of the Bangalore batsmen managed 48 off 62.